I, Wendy, have also had a very busy, but enjoyable month. It has been such a blessing for me to be here in Palawan and it’s been full of adventures and experiences. It’s great to be back where I can speak the language again! When I first arrived, I prayed how I could be a blessing and resource for the local missionaries and Bible workers. One day our LIGHT medical missionary called from the mountain village of Cabulnucan where she helps run a small school. She said one of her teenage girl students was having weird symptoms and she suspected Malaria. I asked a few questions and began to highly suspect demon possession. I told her what she could do, and she soon realized she was not dealing with “flesh and blood” but with “principalities” and “rulers of the darkness”. Over the next few minutes, hours and days I kept in regular contact with her and then with her relief missionary who she takes turns with in the mountains. We prayed for them and gave them regular encouragement and counsel. This was the first time for these missionaries to deal with demon possession and it was a bit scary for them, but they did really well.

Other students began having the same “symptoms” of sudden wild behavior, super-human strength, and then suddenly they’d be fine again a few hours later. One girl told the missionaries what she saw and what the spirits told her when she was possessed. It was disturbing. She went to a witch doctor, against the missionaries’ advice, who interpreted what she saw, explaining the bad characters she saw were the missionaries. The people report that a couple of the girls have had this before off and on in the past. The people are very steeped in demon worship and satanic, tribal rituals. We know Satan is not happy with God’s saving message coming to this village. But many of the students and parents are not distracted with Satan’s temptations. There are many attending church each Sabbath, as the missionaries explain their need for a Savior. As I update this letter, we have recently had more attacks with our neighbor girl, Jeleta who is originally from this mountain village. Please pray with us for her and for her people that they will choose Jesus and not Satan to be in their hearts and in their village.

The highlight of my time in Palawan has definitely been my visit to Kemantian, the AFM project where I served for 5 ½ years. God provided a sunny couple days in the middle of monsoon rains for me to make the 4 hour trek up and back and be able to visit as many people as possible. I had not seen most of the people for four years! Every kid or adult I met on the trail or at the clinic I recognized as someone special and I would ask with excitement, “who’s this?! What’s her name!” and then oh how exciting to hug and talk with them! Many of the children were very small the last time I saw them. My last morning there, a bunch of the school girls came over to sharpen their machetes at the clinic (for their work-bee day—they cut the grass and clean things up). Some of them I had not seen yet and I went through the whole excitement again of guessing and finding out who was who. And then I would always say “But you don’t remember me, do you?” and they would say “E’nga!” “Yes, I do!” I had so much fun talking and playing with them that morning; I just couldn’t take my eyes off of them or pull myself away. I taught a couple of the girls how to play the guitar and they learned so quickly. I bet they will be experts by the time I see them again.

I gave worship for the high school students one day, talking about temptations and how we should strive to obey God rather than men. I gave them each a small, English New Testament Bible and their eyes grew so big as if I had given them a piece of Gold! One of the boys kept flipping gently through it, saying reverently “this is food for the soul!” They do not know English yet, but they have Tagalog and Palawano Bibles they can compare it with and some of their teachers are American student missionaries so they can ask questions also.

Another highlight was my visit to the mountain village of Karusuan. One day after church, a Palawano man approached us and told us that his cousin really wanted to learn about the “Words of God.” He was from Cabulnucan, the village I mentioned earlier where we have missionaries working. He was blessed by their presence and had come down specifically to talk to us. He said there were other religions accessible to his cousin’s village but they had not studied with any of them. When I talked directly to the cousin, he said that their village was not interested in any other religion and that they only wanted the “religion of Kemantian.” The Palawanos have all heard of Kemantian and seen the blessings it has brought. I didn’t have the heart to tell him that we had a dozen other similar requests and that we didn’t have enough missionaries to even keep up with all the areas where we had already started work. But for some reason I did not hesitate or even ask too many questions, and I promised to come visit and give a Bible study.

We arranged a place to meet and I brought a couple other Bible workers with me. It took 45 minutes to drive there and we had to drive across a rushing river to get to the base of the mountains. At this point I thought we were just meeting in someone’s home in the lowlands with maybe one or two people. But when we arrived and the man said “are you ready to hike?” we were all surprised! We were not prepared to hike. I had miraculously recovered from Malaria just that morning and our patriarch companion, Simeon was in his late 70’s. But the man said the whole village was waiting for us, so we looked at each other and said, “God will go with us. Let’s go!” We crossed the waist-deep river 5 times before climbing up a beautiful trail an hour and a half to the village. Sure enough the whole village was expecting us and they began to trickle in from far and wide. We gave a simple study and introduction to the Bible and after more people arrived we gave a health lecture about where sickness comes from. They were so attentive and interested in all of this very basic information that we all take for granted. The adults could not read, but they seemed more intelligent and less sickly then many villages. Many of their children could read because they were going to school in the lowlands. I could not believe that they had really never heard any of the Bible stories or any of the Gospel since they are not that far from the lowlands. They fed us a couple unripe, cooked bananas for lunch and we asked for some coconut water which sustained us all day. As a parting gift they gave us a small handful of wonderful smelling, raw mountain rice. They kept asking us when we would be back. We were honest with them and did not give any empty promises, but we told them to pray for more missionaries or a helicopter– or both! I told them to make a landing pad for a helicopter and they showed me an area on the ridge that looked perfect. Our missionaries plan to visit there whenever they can even if it’s just once a month.

The fields are truly ripe but the workers are few! We continue to see the need for more, small, medical-missionary training schools, and we are eager to assist, but at this point we don’t have anyone to head it up. Thank you for remembering all these things in your prayers and for your continued support for the work here in the Philippines.

–Medical supplies–Thank you for recent donation from GVM!

–Partners for single missionaries serving in remote areas–found! Thank you!

–God’s timing for missionaries, Sean and Pris to come back to Palawan (waiting on immigration stuff) 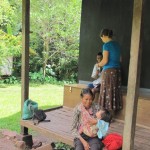 Front porch of new clinic with Carrie the nurse In-patients on the back porch of new clinic Nyug kids, they still remembered me! Special music with kids and Cocoy on the guitar